This work is licensed under a Creative Commons Attribution-NonCommercial-NoDerivs 3.0 Unported License.


At the beginning, quantitative history met the mainframe computer

Emmanuel Le Roy Ladurie promoted the French School of the Annales. In his essay The Historian and the Computer (1973) he wrote that “history that is not quantifiable cannot claim to be scientific”. History had to be done only using computers. For this “nouvelle histoire”, the historian’s craft was depending first on the demographic and economic structure, then on social factors and finally, from intellectual, religious, cultural and political issues. Only historians analyzing enormous quantities of data's would have revealed the real “meanings” of history. Quantitative history would have explained the structure of historical processes and the computer was the new instrument needed to perform such a task.
The launch of a big sophisticated computer mainframes in 1953, the IBM 650, was soon used in universities to solve the epistemological problem of how to query enormous quantities of serial data’s.

Edward Shorter wrote a first guide on the historian and the computer in 1971.
Historians like Charles Tilly’s writing on Computers in historical analysis in 1973, developed comparative studies based on huge statistical surveys organized through computational methods. It was necessary to use specific retrieval procedures submitting specific queries to the database. It became an alternative in the historian’s workshop to traditional methods analysis based more on the narrative and textual analysis.

Many of these quantitative studies failed because of the impossibility to recreate and verify the process. Still today, historians remain skeptical about the overall results of these computational activities and about their impact on history as a discipline. In 1979, Lawrence Stone criticized this technological and quantitative determinism based on assumptions derived from sources that nobody could have re-used. For Stone, the many quantitative studies were too formal, often useless and they dispersed an enormous amount of energies and financial means for supporting the IT teams needed to work with big computer architectures.
The personal computer, the historical workstation and Humanities Computing. 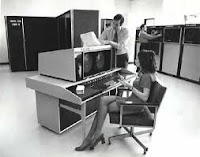 The workshop of historians and computers did not collapse after the abandon of the use of IBM mainframes. The floppy disk with 130Kb was born in 1970 and the first IBM 5100 “Personal Computer” in 1975. This latest invention spread at the beginning of the 1980.

The digital revolution started from the use of new word proceeding software’s and specific programming languages for historians which served directly individual research in stand-alone history workstations, a “microcomputer revolution for Historians” wrote Richard Jensen in 1983. This hardware and software transformation permitted a new kind of handcrafted workshop in historical research and coped better with the complexity of history not limited to serial data’s.

Manfred Thaller was one of the leaders of the methodological transformation of historical computation.
The new programs were able to analyse hidden semantic linkage between primary documents. In 1986 in London, an International Association for History and Computing was created to promote the use of computers in history. At the end of the 1980, Thaller invented new computing relational languages with more sophisticated retrieval capacities: the Clio -then KLEIO- software at the Max Planck-Institut für Geschichte. Kleio served to manage and access diverse typologies –not only statistics- of primary sources in the “history personal workstations”.
But when Tim Berners-Lee created the Web in 1991, even these specific software’s build for historians became obsolete. Internet based communication started already in the 1980 with the use of e-mailing lists but grew rapidly to access library catalogues, know about the existence of archives, consult primary sources and also read historiography. Commercial software’s loaded in new lighter and cheaper personal computers were able to change again the historian’s workshop embedded in a broader digital history through internet connections and web networked activities described as the “new society of networks” by Manuel Castells.
A new koinè, humanities computing and historical computing, with new databases, new retrieval languages to index information, semantic and textual analysis, new typologies of iconographycal and visual sources, the use of geographical information systems, etc. became soon and thanks to web based communication, a new field of historical practices called by Edward E.Ayers in 1997 as “digital history”.


In 1992, the French medieval historian Jean-Philippe Genet introduced the concept of  meta-sources, the new sources created during the computing process and derivated from a “material” evidence. The first important primary sources digitization projects were loaded in the web in the second half of the 1990s in North America and Europe.
But today, digital history faces new interactive scenarios  integrated into what is now called  digital history 2.0. Digital primary sources are not only made of meta-sources but are often born in digital format and web sites themselves are new kind of primary sources. Large scale crowdsourcing activities in a web now conceived as a more interacting and collective enterprise, are building new invented archives. The contribution of everybody is needed to complete new web contents in a new kind of web open to many different actors. These new digital archives are offering an enormous potential for new historical inquiries in most fields, thereby redefining history as such. 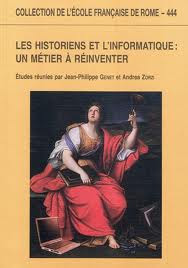 This digital turn modified the history workshop with new methodologies and new critical paradigms especially looking at the concept of “authenticity”, “stability” and “reliability” of digital artifacts and documents. The modern personal computer and other devices like smartphones and tablets are now integrated to the history workshop. Personal web station integrates hardware components like a modem, scanner, printer, CD/DVD device, webcam and digital cameras to reproduce archival documentation. New software’s embedded directly in the browser are often based on an open source technology working with other small pieces of software’s, the widgets and applets.
Transformation inside the history of digital history started in 2001 when the Wikipedia allowed to build collectively an encyclopedia. The new web of historians is connected through social networks. Digital history is becoming highly interactive, encouraging user participation and engagement of the people outside the restricted area of academic historians. Web 2.0 and soon also the semantic web 3.0, are opening history as a discipline to a wider participative public especially in the field of Digital Public History. New identities are building socially new “places of memory” in the Public History web today and are questioning the methods and paradigms defining a new digital historian craft as part of a broader discipline called "Digital Humanities". 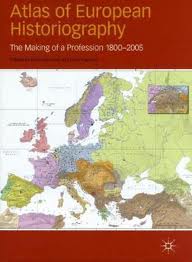 Your Comments, Suggestion, Information are Welcome !

Digital & Public History by Serge Noiret is licensed under a Creative Commons Attribution-NonCommercial-NoDerivatives 4.0 International License.
Based on a work at http://sergenoiret.blogspot.it.